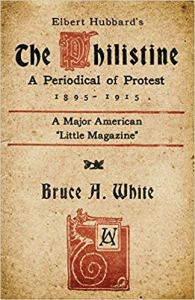 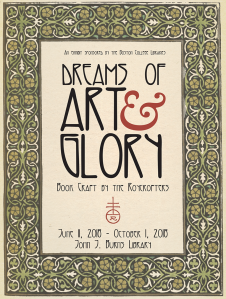 Writer and publisher Elbert Hubbard (1856-1915) is known for founding Roycroft, a community of artists and craftspeople in East Aurora, New York. He established a press and wrote and produced two magazines, The Philistine and The Fra, as well as a series of biographical pamphlets titled Little Journeys. Hubbard and the Roycrofters are the subject of a book by a BC alumnus as well as an exhibit at BC. Bruce A. White, who earned an M.Ed. and an M.A. from Boston College, has recently published a new and expanded paperback edition of his book Elbert Hubbard’s The Philistine: A Periodical of Protest (1895 – 1915). White’s book offers a unique chronicle of Hubbard and his magazine, which featured work by Stephen Crane and Wizard of Oz illustrator W.W. Denslow. On display at Burns Library through October 1 is the exhibiton “Dreams of Art & Glory: Book Craft by the Roycrofters.” Co-curated by Barbara Adams Hebard and Andrew Isidoro, the exhibit focuses on products of the Roycrofters’ bookbinding and printing shops, and features holdings from the BC Libraries that highlight Roycrofter artisan designs, including the Little Journeys series, beautifully printed and hand decorated text blocks, and books in stunning modelled leather bindings. More from the Burns Library blog.

This entry was posted in Alumni Authors, BC Libraries, Exhibitions and tagged arts and crafts, biography. Bookmark the permalink.