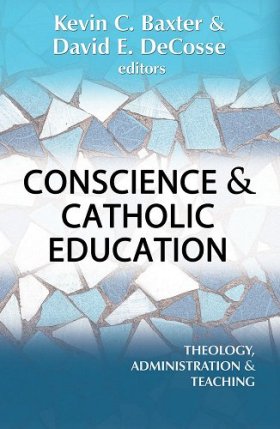 How might recent developments in the theology of conscience in the Catholic tradition be better incorporated into the administration and teaching of K-12 Catholic schools and in Catholic colleges and universities? That question is the driving force behind a new book, Conscience and Catholic Education: Theology, Administration, and Teaching (Orbis Books, 2022), co-edited by Kevin C. Baxter (University of Notre Dame’s Alliance for Catholic Education) and David DeCosse, a Boston College graduate. The volume is a collection of essays from leading moral theologians, including Boston College scholars James F. Keenan, S.J. and Cathleen Kaveny, that explore the social, cultural, and structural dimensions of the theology of conscience in the context of Catholic education. Topics addressed include religious freedom, the challenge of diversity, academic freedom, conscience formation and neuroscience, and more. DeCosse, who earned a Ph.D. in theological ethics from BC, is director of religious and Catholic ethics and campus ethics programs at the Markkula Center for Applied Ethics at Santa Clara University, where he also is an adjunct associate professor of religious studies. His other publications include Pope Francis and the Future of Catholicism in the United States: The Challenge of Becoming a Church for the Poor and his writings have appeared in National Catholic Reporter, The San Francisco Chronicle, and The Philadelphia Inquirer.

This entry was posted in Alumni Authors and tagged Catholic education, Theology Department. Bookmark the permalink.