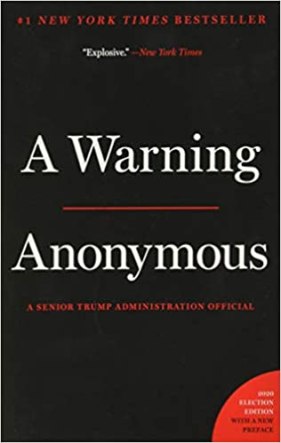 Miles Taylor, whose 2018 anonymous opinion piece in The New York Times provided insight into the chaos and instability in President Trump’s administration as well as the efforts of some insiders to work against the president’s alleged recklessness, will present “Why Dissent Matters — Lessons on Leadership Culture” at a virtual event on February 18 at 6:00 p.m. Taylor also is the author of the best-selling book  A Warning (Hachette Book Group, 2019), an expansion of his accounts of the Trump administration and the consequences of re-electing what he called a “commander in chief unfit for the role.” Taylor revealed himself to be “Anonymous” in late 2020. Taylor was the chief of staff at the U.S. Department of Homeland Security, where he oversaw day-to-day operations. He was the principal advisor to the Secretary of Homeland Security and managed engagement with the White House, federal agencies, foreign governments, and industry partners. He also served as deputy chief of staff and counselor to Secretary John Kelly, advancing efforts to protect the United States against nation-state adversaries, criminal plots, terrorists, and cyber threats. Today, Taylor is co-founder of the Republican Political Alliance for Integrity and Reform (REPAIR); a senior fellow at the McCrary Center for Cyber and Critical Infrastructure Security; and a term member of the Council on Foreign Relations. Taylor’s talk is presented by the Carroll School’s Winston Center for Leadership and Ethics and the Political Science Department. Pre-registration is required.