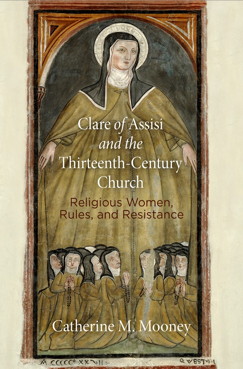 School of Theology and Ministry Associate Professor Catherine Mooney has been awarded the Hagiography Society Book Prize for her publication Clare of Assisi and the Thirteenth-Century Church Religious Women, Rules, and Resistance (University of Pennsylvania Press). Founded in 1990, the Hagiography Society is an organization of scholars in various disciplines whose research involves the study of textual and visual media pertaining to holy men and women. The award citation reads in part: “Through extremely careful attention to philological, contextual, and documentary detail, Mooney is able to pull back the layers of hagiographic ideal that were imposed onto Clare’s official image and often served to erase the actual conditions in which Clare and other women like her lived. Clare of Assisi and the Thirteenth-Century Church, then, is a work of recovery, of restoring forms of women’s religious life in late medieval Italy; it is a model for how scholars of the premodern might seek out marginalized or suppressed presences in our canonical texts.” The prize will be awarded to Mooney this month at the International Congress on Medieval Studies. For more about Mooney’s book, read this 2017 BC Bookmarks post.