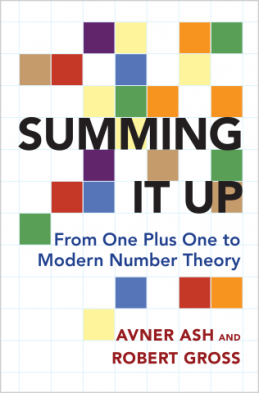 Summing It Up: From One Plus One to Modern Number Theory (Princeton University Press), written by BC mathematicians Avner Ash and Robert Gross, is now available in paperback. Appropriate for numbers novices as well as college math majors, Summing It Up uses addition as a springboard to provide an accessible look at numbers and number theory. Ash and Gross explore addition’s most basic characteristics before moving onward to issues at the forefront of current mathematical research. Ash and Gross are also the co-authors of Elliptic Tales: Curves, Counting, and Number Theory and Fearless Symmetry: Exposing the Hidden Patterns of Numbers.  The authors talk about their work in this BC Libraries video.

This entry was posted in Boston College Authors and tagged Mathematics Department, numbers. Bookmark the permalink.